A COMPETITION MARKED BY IRREVERENCE AND PASSION FOR RACING

At the beginning of the 20th century, car competitions were practically held on roads, often disputed between locations, and rarely on closed circuits.

At this point, the challenge arises for the ramps which, due to the ease of their execution, quickly gain numerous fans, not only from organizations, but also from pilots and the public.

The emerging Automobilismo Desportivo Nacional also cherished this modality, having appeared throughout the country, including in the North, several ramp events, normally disputed on roads close to the localities.

It is in this context that Eurico Santiago Sameiro, a great enthusiast for novelties, founder of Sporting Club de Braga and Aéro Club de Braga, leads a team to carry out a Ramp event in Braga.

It was the year 1927, when the EN 101, which connects Ponte do Bico to Braga, was chosen for the event. At the time, this road was in “macadam”.

The race took place in November of that year, being won by Alfredo Marinho in a Bugatti Type 35, which prevailed over the remaining sixteen pilots registered. 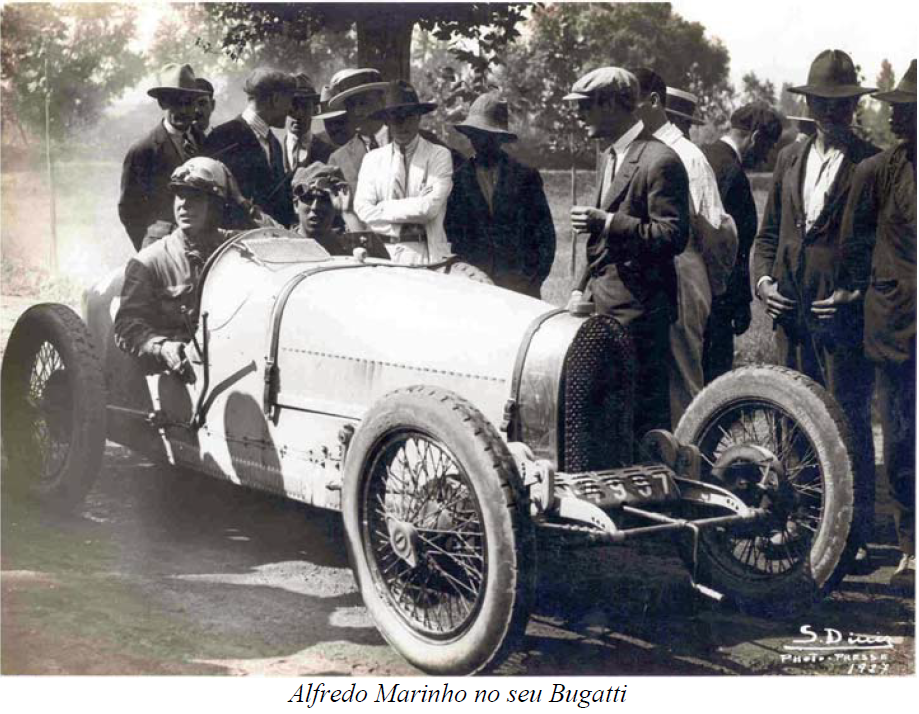 As a result of its enormous success, “Correio do Minho” accepts the challenge of organizing a new Ramp in 1931. Using the support of the Automóvel Clube de Portugal (ACP), it carries out the 2nd Ramp of Braga, still on the EN 101.

The race took place under heavy rains and, once again, Alfredo Marinho imposes his Bugatti Type 35 on the other drivers.

When it seemed that the story ended there, the animal of motor sports continued to undermine the most enterprising spirits and, in 1950, the ACP was invited to organize a ramp race again in Braga.

At this time, the Estado Novo did not authorize the use of the EN 101 and it was decided that the race would take place on the Falperra road.

Its route would start next to Picoto at km37 of the EN 309, ending at km41, after the Restaurant area, totaling 4km of route.

However, although there was recognition of the road, there was no official training, and only one climb was made… a “man” challenge!

Thus, the 2nd stage of the recently created National Ramps Championship, with a huge audience, was won by the future national champion José Soares Cabral in a very current (at the time) Allard. 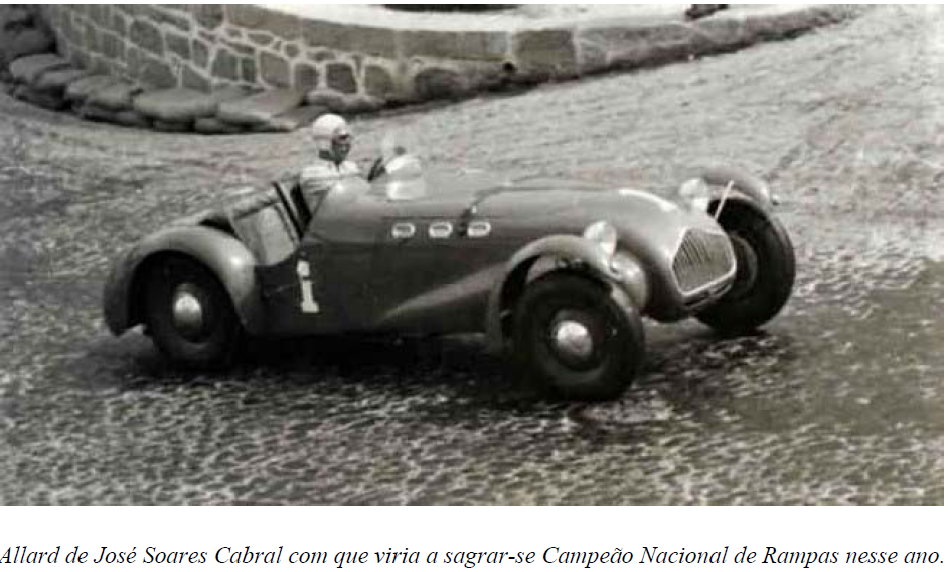 The following year, the race was carried out with the same premises, registering a new flood of public, and the fastest driver was the aristocratic Conde Monte Real, in a very powerful 100hp Ford V8. 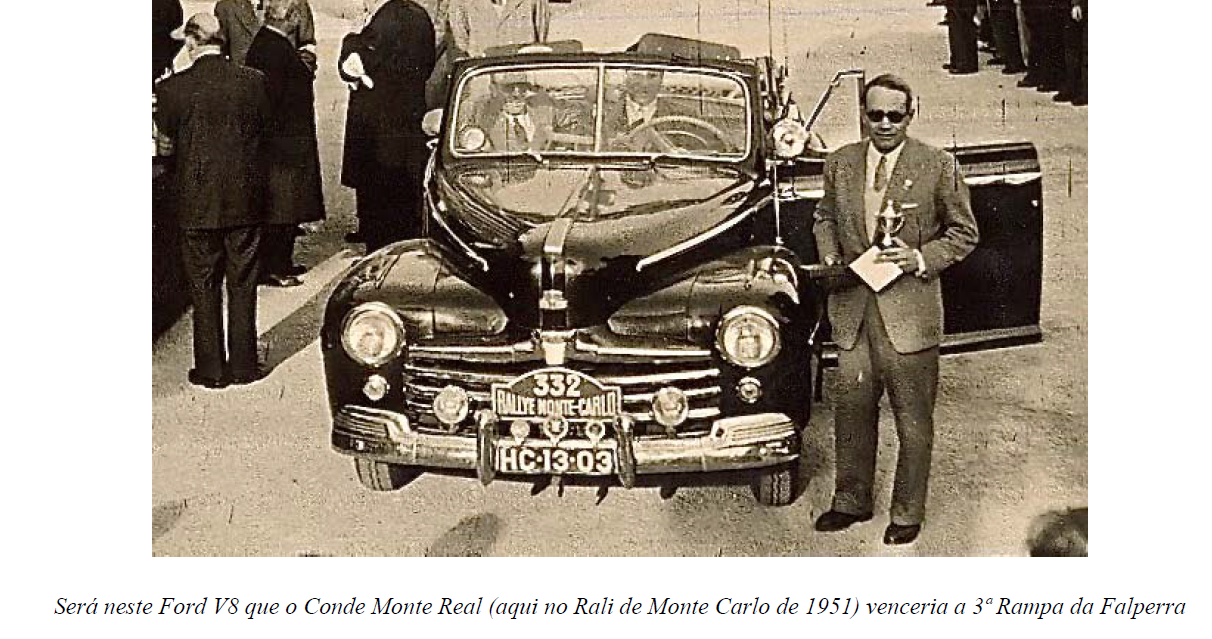 For minor reasons, another interruption appears for another eight years, in which the public of Braga was left without motor sports at the door.

In 1960, clubs in the city of Porto, with motorsport sections, decided to carry out a ramp test, and perhaps because of the difficulty in carrying it out in the municipality itself, they pointed to Falperra, since this location had already proved to be a guarantee of sporting success and crowds.

The absolute best time belonged to José Lampreia, behind the wheel of a Triumph Tr3, imposing his machine’s agility and weight/power ratio on much more powerful cars, also winning the Grand Touring category.

The Sport class was won by Fernando Oliveira, in an Austin Sprite, while César Torres imposed an eccentric Hansa 1100 (Borgward) on the Turismos. 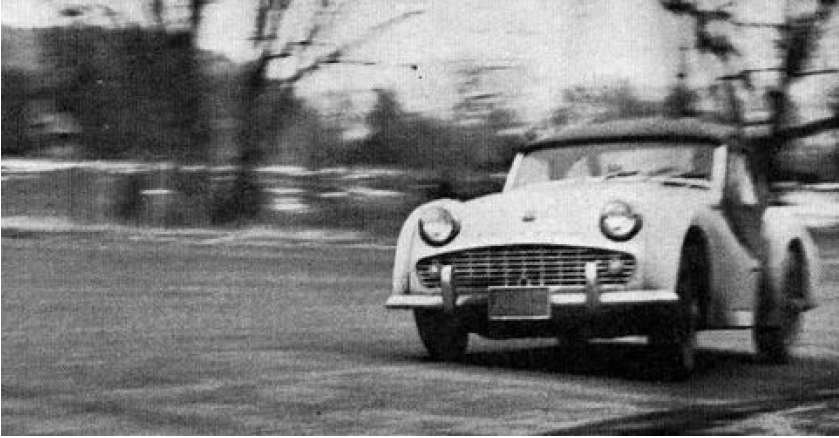 After another fifteen years of interruption, in 1976, the Clube Automóvel do Minho (CAM), revived Rapa da Falperra, with the enormous success known to this day.

Two timed ascents will be performed, counting for the classification the time of the best ascent.

This year, the victory would go to the late Clemente Ribeiro da Silva, in the Opel Comodore GSE. 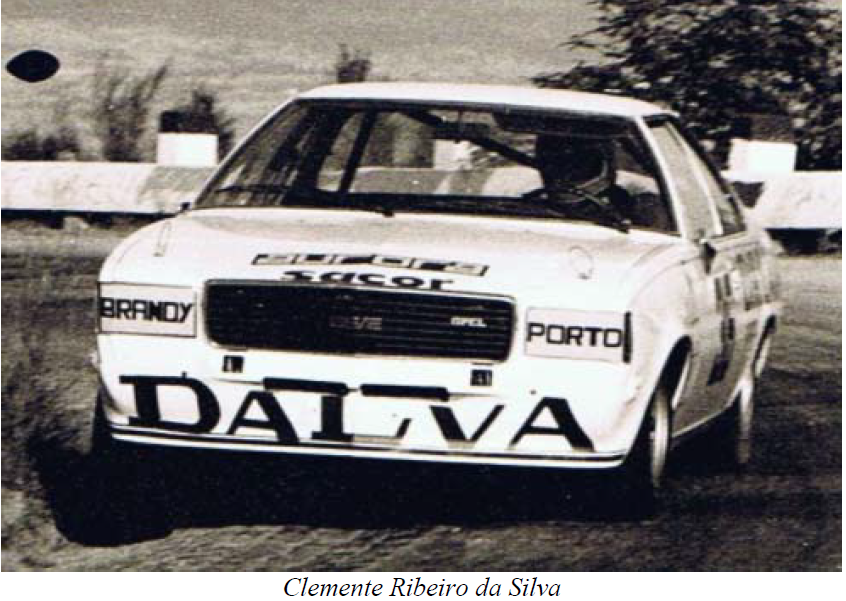 In 1978, the edition became International, with António Barros being the fastest driver, in an Opel Comodore GSE and, in 1979, the Rampa da Falperra was won by the Spaniard Alberto Gonzalez in a Seat, and the immense public got to know, for the first time, , a foreign winner. 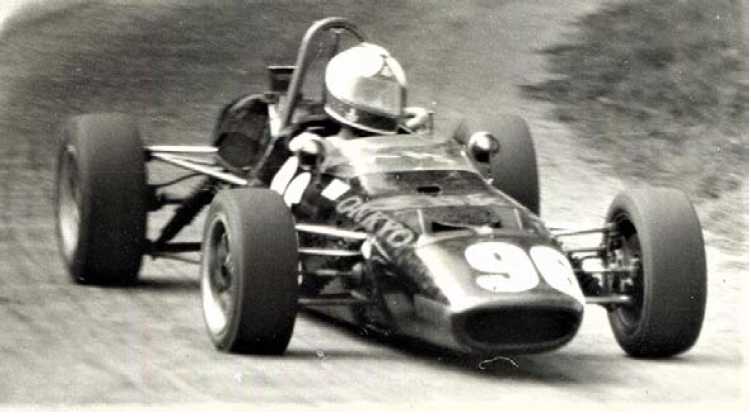 In the following years, Rampa Internacional will meet António Barros in a Porsche, also in a Porsche Joaquim Moutinho and again, in two consecutive years, Alberto Gonzalez in a Seat.

In addition to the competition to count for the National of the modality won by Mário Silva, now in a BMW M1, Clube Automóvel organizes, in 1984, a second extra competition as a candidacy for the European Mountain Championship. 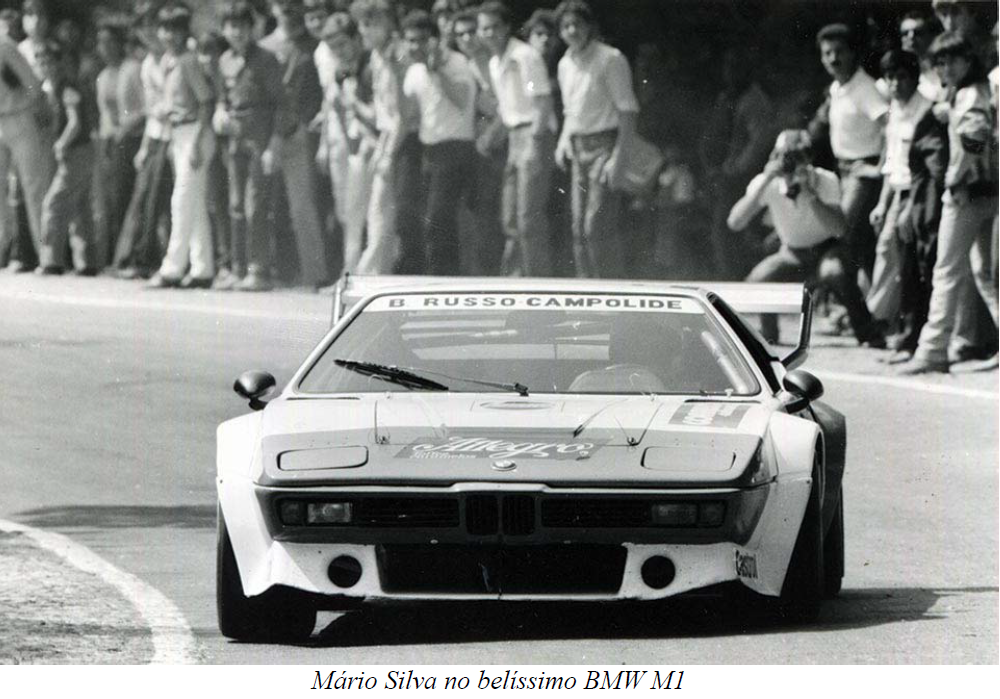 This 13th Edition did not bring any bad luck and, with an irreproachable organization and the support of the late Alfredo César Torres, everything is going for the best.

The FIA passes with distinction the candidacy to integrate the Rampa da Falperra in its calendar, to score for the European Mountain Championship.

The race is won by the virtuoso António Rodrigues on the Lancia 037, who would make a brilliant performance in the Rally de Portugal. 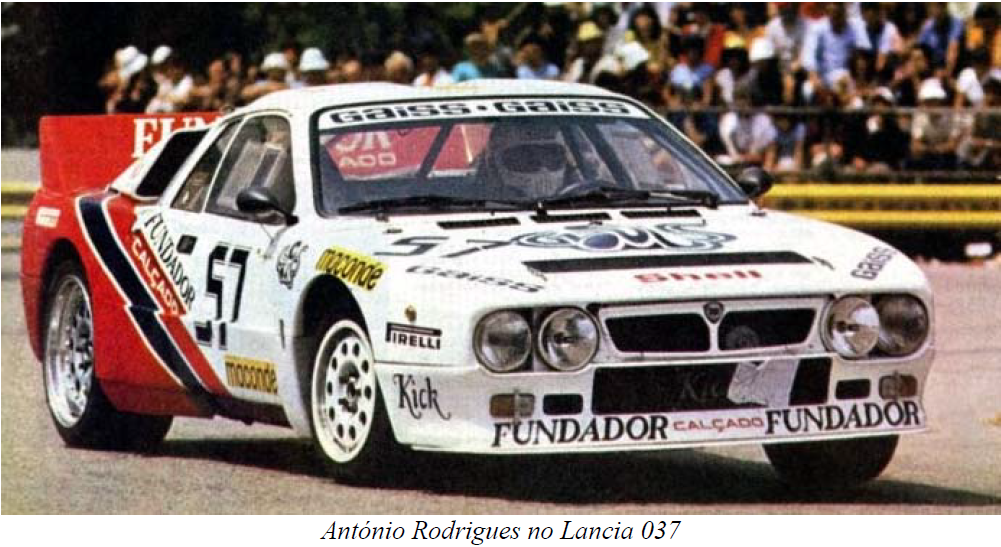 Already scoring for the European Mountain Championship, in 1985 the route is added by 200mts, as it remains until today, to integrate the famous curve of the Pope, in order to improve the show, thus totaling 5.2km.

According to the rules of the European Championship, the winner is found by the sum of the times of two timed climbs.

The internationalization, added to the impulse that RTP would promote with live broadcasts, makes the competition take on another notoriety, with huge crowds of public every year.

The 1st Ramp winner to score for the European Mountain Championship is the Italian Mauro Nesti, in an Osella BMW, a victory that he would repeat in the following years, starting a domain of “barchetas” in this mythical route from 1985 to 1988. 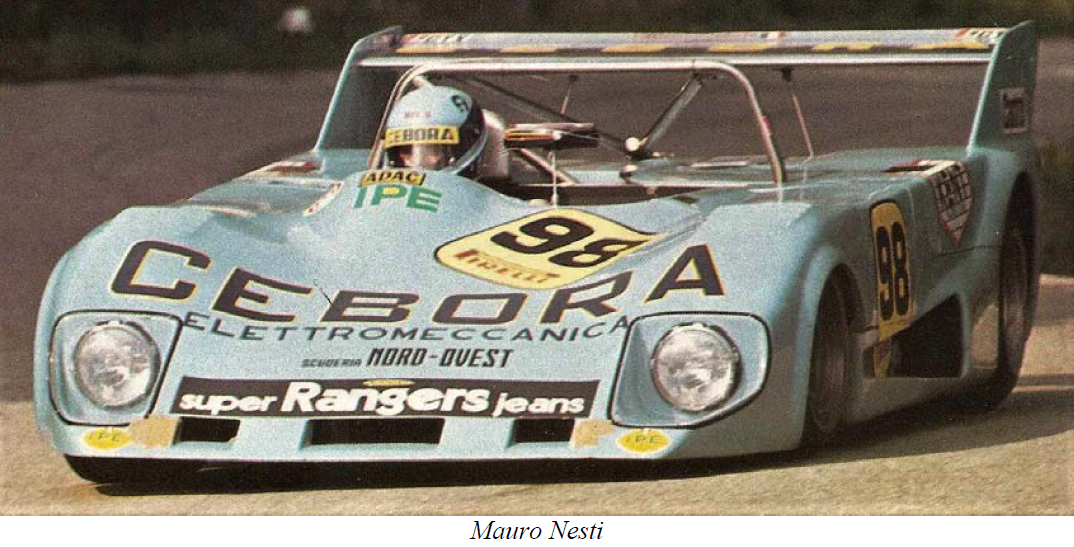 From 1989 to 1993, the King of Rampa will be the Spaniard Andrés Vilarinho, in a Lola T280, which started a series of four consecutive triumphs. 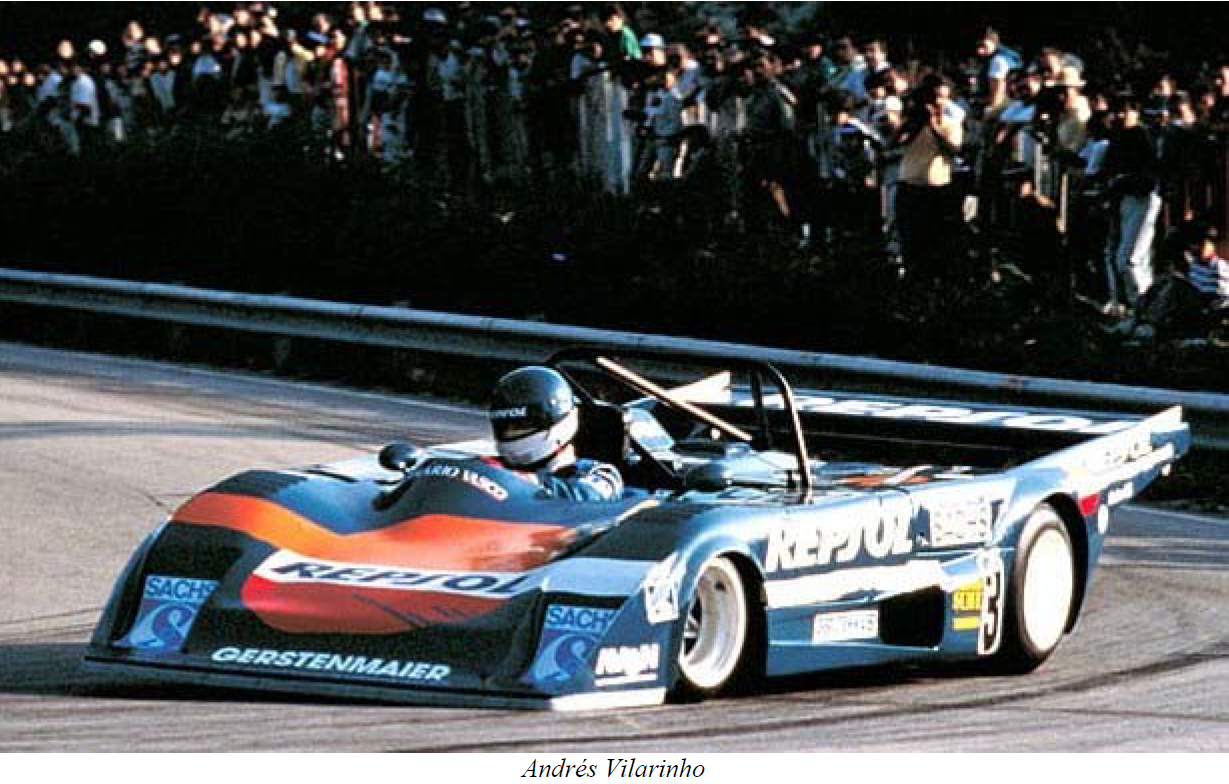 In 93, 94 and 95 the German Rudgier Faustman takes the victory, along with the Spaniard Francisco Egozue in 94, the Italians Fabio Dante and Irlando Pascuale in 98. 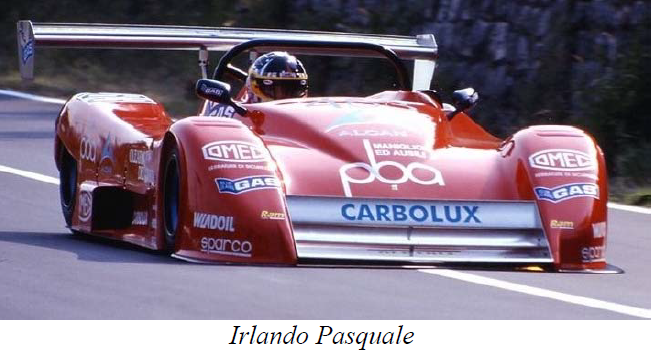 In 1999, 2000 and 2001, Franz Tschager completely dominated the Ramp layout, imposing a fast and spectacular drive.

In 2002, the competition was interrupted again for financial reasons, resulting in the withdrawal of transmissions from RTP.

Long and painful years deprived the people of Braga and all the enthusiasts who, year after year, filled the slopes of Falperra, to watch the mythical Rampa. 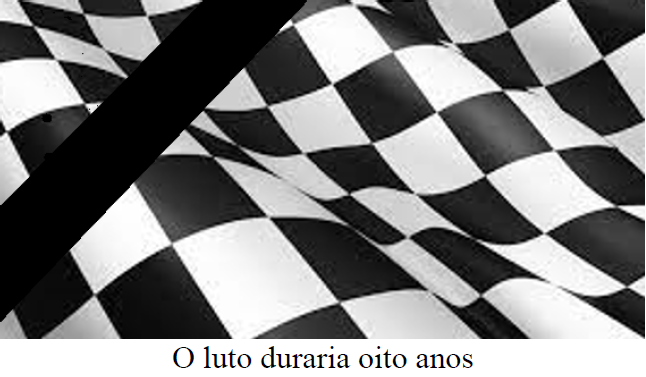 In 2010, with a new management, Clube Automóvel do Minho decided that a race with so much history should not end like this and, with the certainty of the unconditional support of Braga’s residents, of all motor sport fans, of various institutions and bodies, with special emphasis for the Braga City Council, and with the confirmation of being part of the European calendar again, it finally organizes the 31st International Ramp of Falperra.

Andrés Vilarinho, with the warmth of the local public that has always nurtured a special affection for our brother, accompanied by a huge legion of fans from Galicia, imposes himself with the Norma M20, with a special taste for the fifth victory in “his Rampa”! 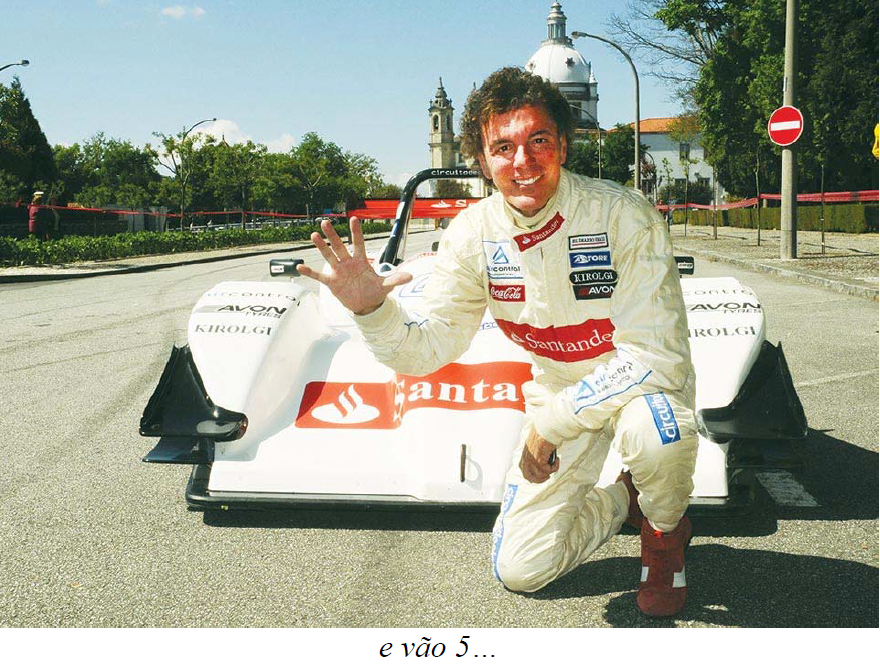 Like the legendary Fenix, Rampa is reborn and once again assumes a role of reference in motor sports, a true business card for Braga, the Region and the Country.

In 2011, Rampa knows a new winner. For the first and only time, a single seater (Reynard K02), coming from the Japanese F3000 championship, by Fausto Bormolini. With his speed, he beats a legion of invincible barchetas. 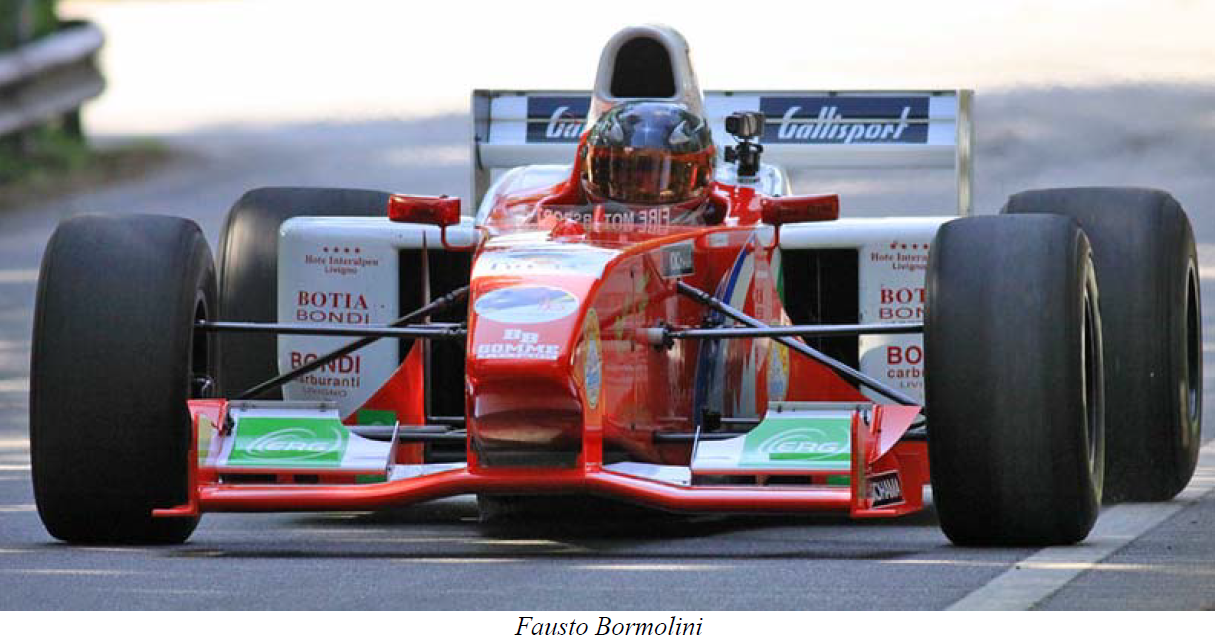 In the following years, from 2012 to 2018, we witnessed the complete dominance of Simone Fagiolli, who with successive records, leaves no room for doubt that he is now the “King and Lord2 of Rampa da Falperra.

This overwhelming dominance was only interrupted in 2016, as a result of a strong bad weather that hit this region on the Rampa weekend, meaning an increased danger for the speed of the “barchetas”.

Consequently, it originated the pact of non-participation of the European Queen class pilots in the official climbs.

However, neither the public nor Pedro Salvador behind the wheel of the Norma M20FC were frightened by the rain. Thus, the pilot from Porto imposes his law and, 30 years later, once again places the Portuguese Flag at the top of the podium. 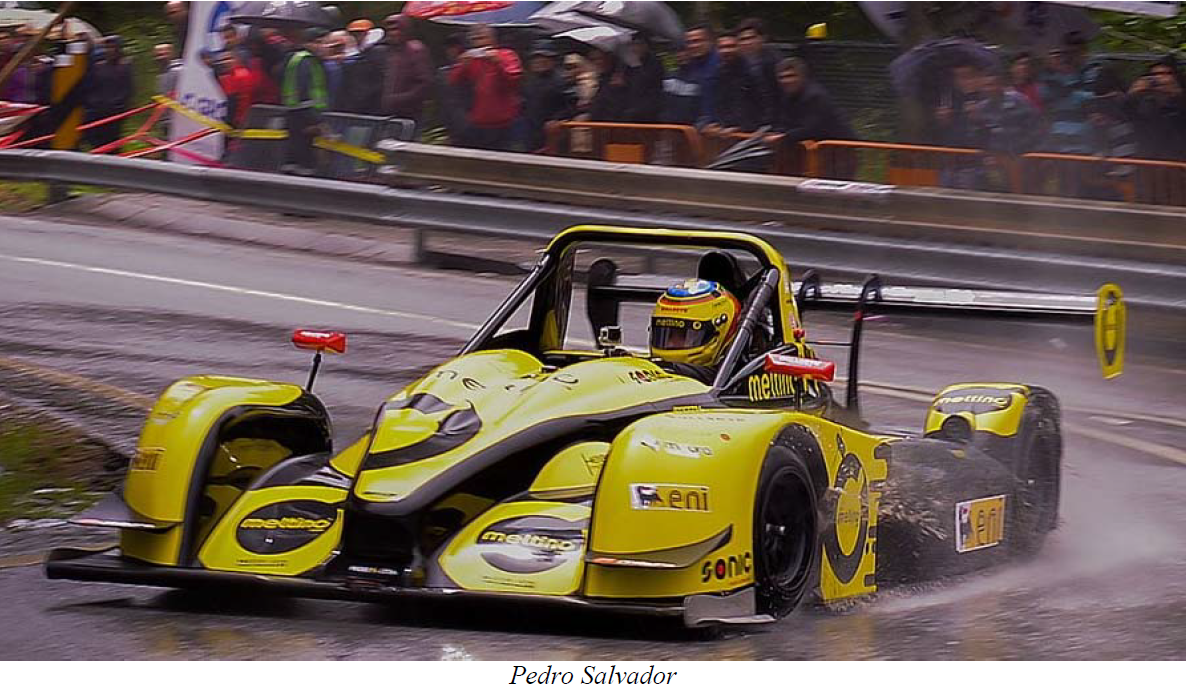 In 2019, Cristian Merli, who in previous years had already been questioning the “reign” of Fagiolli, breaks the track record and finally manages to be the fastest, with a canyon ascent!

In 2020, the Falperra International Ramp does not take place, due to the pandemic that conditioned the holding of sporting events.

In 2021, in agreement with the FIA, the Falperra International Ramp is replaced by “MASTERS”.

With its own characteristics, this event is the only international motorsport competition disputed by teams from different countries. Every two years, it takes place on a rotational basis between the countries that organize the European Mountaineering competitions.

For reasons of safety and autonomy of cars in competition from several countries, which had very small fuel tanks, the Ramp route is shortened to about 3km, keeping the starting place and ending a little before the acclaimed “castle” . 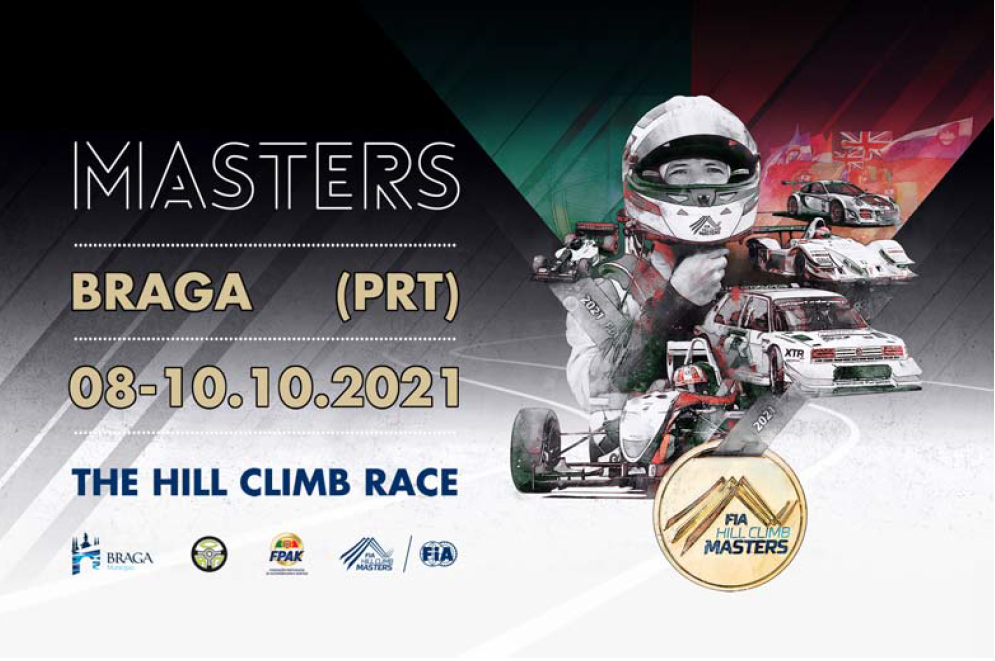 With an Organization like O GRANDE, deserving praise from the highest national and international entities, the city of Braga witnessed an event that in the previous days filled its avenues with life, and would also fill the route with a huge crowd of passionate enthusiasts. from all over Europe, on race days, to witness the huge spectacle that the best drivers from 18 countries would provide.

In the race, France takes the champion’s scepter, followed by the Slovakian team, with the Belgian team completing the podium.

Among the drivers, the fastest would again be the memorable Cristian Merli.

Those who were present as a participant or as a spectator will certainly never forget the Masters held in Braga, which leaves many with the desire to take place again in Braga, on this route.

In the history of the Ramp, in addition to all the riders who have participated in it, the “home riders” already have a special reputation.

Always cherished by their audience, it is impossible to reference them all.

However, it would be unfair, both for its popularity and for the results obtained, not to mention the names of the victorious “home pilots”, such as Rui Lajes, Nelson Cruz, Adriano Barbosa, António Vasconcelos, Pedro Rodrigues, Rogério Peixoto and Hugo Peixoto. in earlier times. 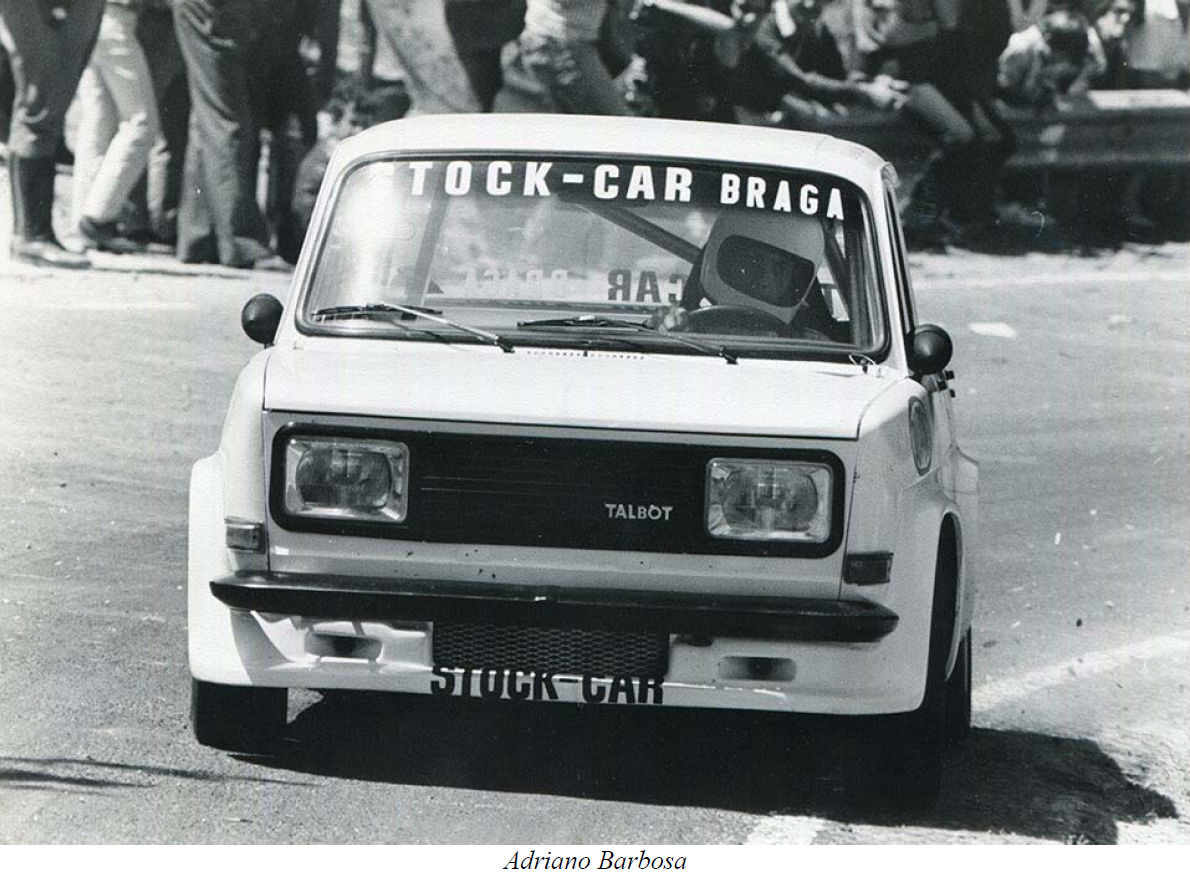 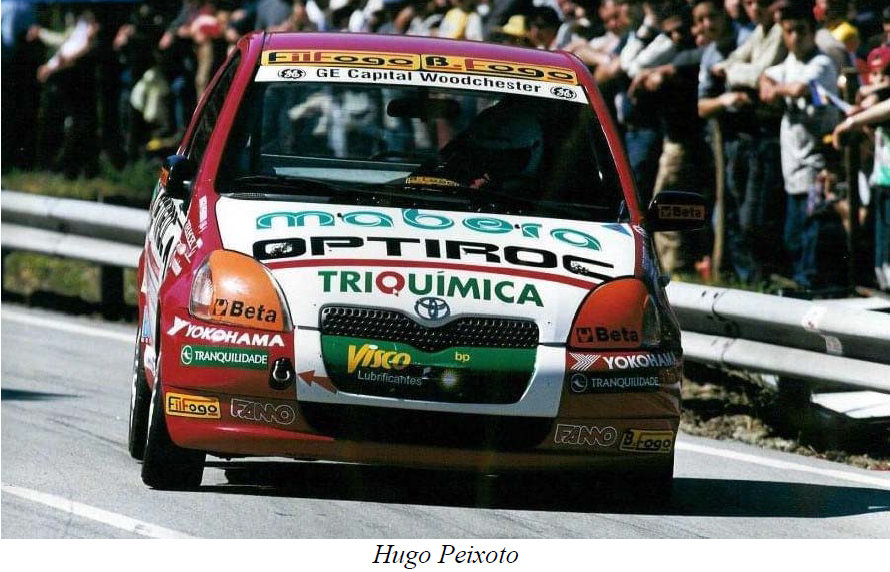 In more recent times, the names of Rui Costa, Patrick Cunha and Pedro Loures, among others, have contributed greatly to the mythical and unforgettable history of Rampa da Falperra. 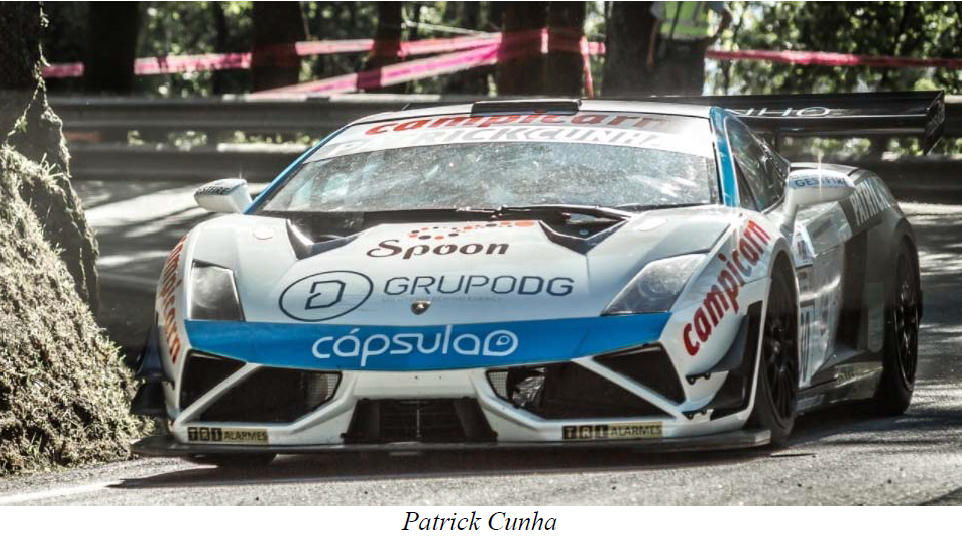 Finally, one could never talk about the history of Rampa da Falperra, without a huge reference to an audience with “Big A”.

An audience made up of Portuguese and Spanish, women, men, adults and children, true fans who have always cherished the Rampa, perpetuating an event that is already a “tradition” of several generations, a true passion that passes from parents to children and that is part of the experience of many families.

It is this audience that, year after year, makes an unsurpassed contribution to making the Rampa weekend a real party.

An audience that lives the Rampa with fervor, taking advantage of vibrant gatherings, enjoying the show, respecting safety limits and transforming this mythical event into a family party, a People’s party, a perpetuation of history that has accompanied the city of Braga since for several generations. 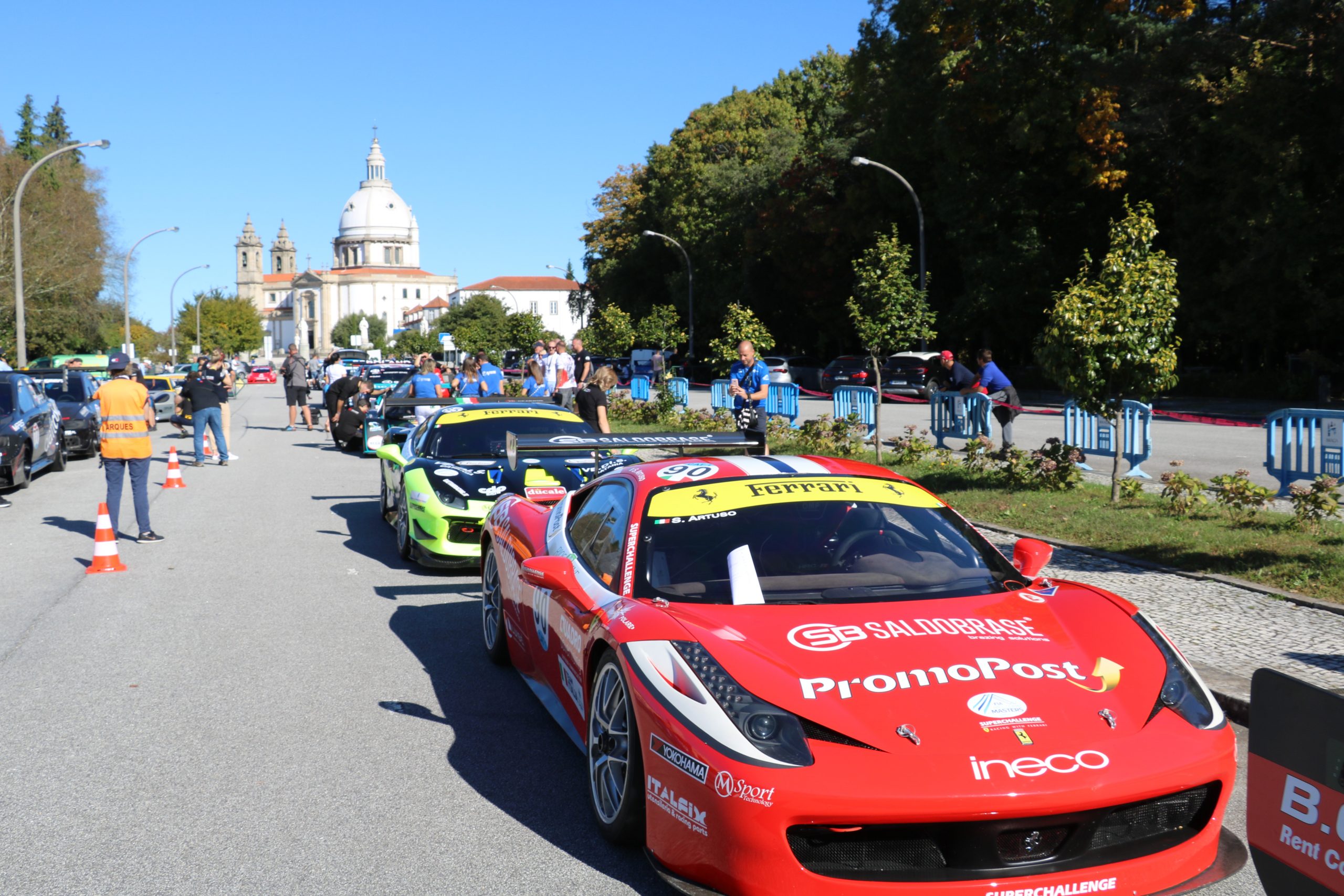 It is, therefore, this Audience that justifies the enormous effort and dedication undertaken in the realization of this event.

The award of successive Public Recognition Trophies recognizes the great effort, commitment and quality with which Clube Automóvel do Minho always gives itself to its organisation.

It should be noted that, “in a kind of icing on the cake”, Ferrari integrates in the itinerary that it suggests to its customers, the ascent of the Rampa da Falperra route – a true cross-border route, which conquers fans and tourists all over the world, not only for its stunning landscape, but also for all the history that has already been made in it! 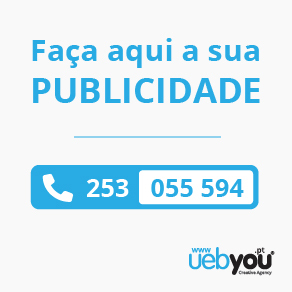